The Lord’s Prayer // Your Kingdom Come

sermon notes from the Vineyard Church of Milan 11/11/12

Drawn by the Holy Spirit,

accompanied by our savior and brother Jesus,

we come to our loving, powerful Father in the heavens,

settled confidently in the place of prayer,

longing for everything in our own life,

in our families, in our communities,

in our world to be set right,

as he fulfills his promises to us and through us.

Not necessarily our experience, not at first... (reality check...).

But as the spiritual practice of praying as Jesus teaches us does its intended work, our souls will come to anticipate prayer as this kind of experience.

Further up, further in: Jesus teaches us to pray “Your Kingdom come, your will be done, on earth as it is in heaven.” 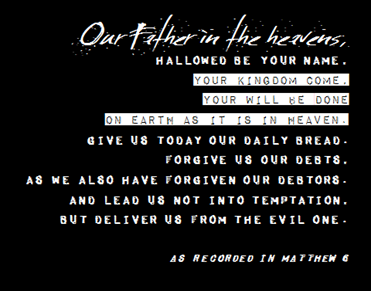 Thesis: when we pray “Your kingdom come, your will be done, on earth as it is in heaven,” Jesus means for us to be asking for real things to happen, in the real places that we live, in the real lives of the people we live with. In our own real lives.

Specifically, we are asking that God would

defeat evil in every corner of our lives and this world,

and in the end, be in charge of everything everywhere,

because as he does we will experience true freedom and love,

we will know peace,

and our the purpose of our lives will come into view. 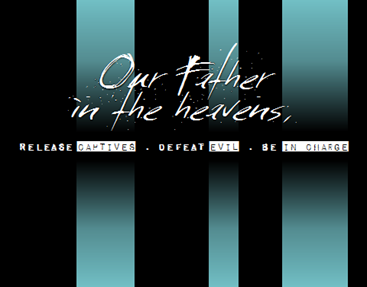 [Reminder of purpose of Jesus teaching on prayer, participating with Jesus in his liberation mission, learning to live lives that make sense in light of the good news of the kingdom……what exactly does it mean for God’s kingdom to come, for his will to be done, on earth as it is in heaven? We’ll only know as we pray and see how God answers. This part of the prayer is a little like a knock knock joke:

Jess me, open the door!

Hope for today is simply that we would be convinced to get involved daily in the asking, whatever the answers may be]

Ever been subject to bad authority? A bad teacher or coach…? A bad boss…? [Horrible Bosses clip, gam gam…

Bad authority is impersonal, incompetent, and oppressive. Ever had to fight a bureaucracy unsympathetic to your needs…? Experienced racial or other discriminatory oppression…? Grown up in a family with parents who were over their heads, or had some chip on their shoulder towards you, or were simply preoccupied with other concerns, work, addiction, emotional disorders…? The longing we experience in those situations has the same root as the longing we have for God’s kingdom to come, his will to be done, on earth as it is in heaven.

Human beings are withered, crippled, and suffocated by impersonal, incompetent, and oppressive authority. 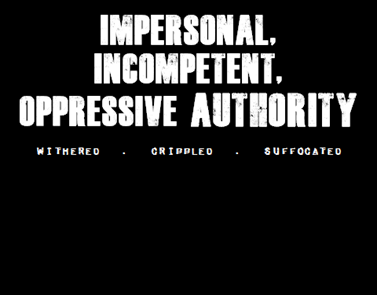 We have a deep longing

to be recognized as valuable within our communities,

to live in secured order,

to have breathing room to grow and create… [examples] 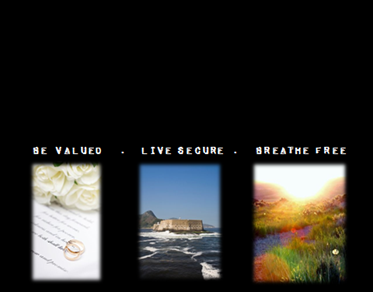 When Jesus taught his followers to pray “your kingdom come, your will be done on earth as it is in heaven”, he was speaking to people who were sick and tired of the powers that be.

The people Jesus was teaching to pray were longing for a new king. The Roman emperors were a curse to Israel. The Herodian kings were a cruel joke.

Jesus’ students, and in fact most of Israel, clung to the promises given through the great prophets of Israel that YHWH would establish his kingdom, taking up the throne in Jerusalem, defeating and displacing every other king. YHWH’s kingdom would be bathed in beauty and love, its goodness would be unshakable, and the children of God would bloom in the radiance of his favor.

Isn’t our longing the same too, sometimes? Or at least, it would be, if we knew what it would mean for God’s kingdom to come. 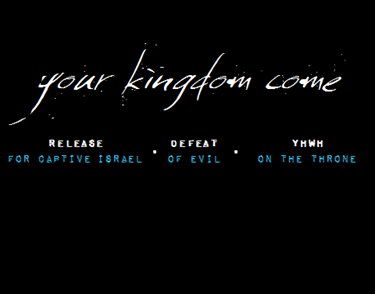 The promise of God's kingdom Israel was clinging to had three main parts: (1) release from captivity for Israel, (2) the defeat of evil, and (3) the return of YHWH to Zion, to the throne in Jerusalem. When Jesus taught his disciples to pray in this way, he was already implementing each of these three aspects of God’s coming kingdom, although in radically different ways than expected. 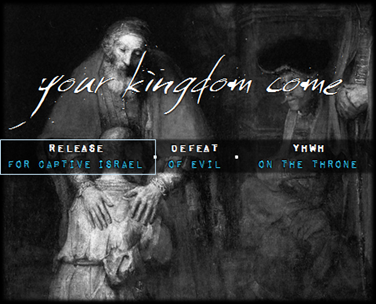 The first great symbol of release for captive Israel was the Exodus story (recap); Jesus told a new story, a story about a son who leaves his Father’s house for the lure of life in a pagan country. His listeners would have understood that son to be Israel in exile, wasting its inheritance and ending up with pig slop. But the astonishing end to Jesus' story is the son returning in repentance and shame to the Father’s house, only to be welcomed by the Father running towards him with open arms, embracing him, giving him new clothes, the family ring, sandals on his feet, and throwing a huge feast. By eating with sinners, healing outcasts, calling misfits to be his disciples, Jesus was saying that the release from captivity has begun, the new and final exodus is at hand. God is, at last, through Jesus, welcoming home with open arms those who have been enslaved in a far off land. 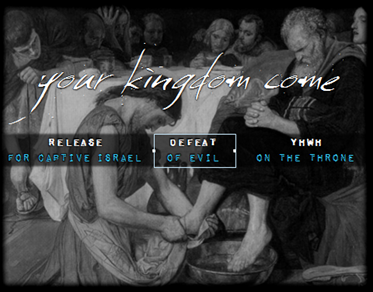 Similarly, Jesus was defeating evil, but not in the expected way, the way of the mighty conqueror. Instead, by every form of self-giving love, all the way to death on a cross. Along the way, healing the sick, forgiving sins, casting out tyrannical demons with freeing authority, overwhelming the condemnation that comes with sin through his gracious welcome. 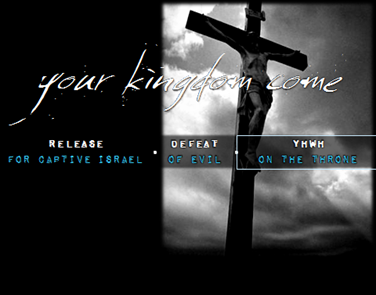 And finally, Jesus was coming to Zion (just another name for the city of Jerusalem) but again, not in the expected way. As a shepherd rescuing lost sheep, with gentleness and grace. In Jesus, YHWH had returned to Zion, lifted up first before the nations on a cross, “King of the Jews” nailed above his head, and then three days later in his glorious resurrection body. 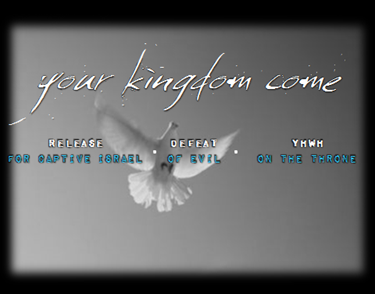 For Jesus’ students, to pray “Your kingdom come, your will be done, on earth as it is in heaven” was first a prayer that Jesus would succeed in his mission of releasing captive Israel, defeating evil, and taking up the throne in Jerusalem. And after the resurrection, it became a prayer that that Jesus would succeed through them and through his Holy Spirit in bringing his resurrection life to bear in every corner of the earth, until the day of final resurrection for all of humanity.

So what does that mean for us to pray “Your kingdom come…?”

We don’t have an oppressive king, at least not literally. But if we examine our heart of hearts, we share with Jesus’ first followers the conviction that things are not yet as they should be. Something is off in the order of the world we live in. Whether that offness is in the world’s political systems, or off in our society, our workplaces, our relationships, our families. Sometimes, perhaps even often, the offness is most clearly felt in our own poor governance of our own out-of-control lives.

Like Jesus’ students after his resurrection from the dead, who continued to pray daily that God’s kingdom would come, his will would be done, on earth as it is in heaven, we live in the time of tension between God’s kingdom that has already come and God’s kingdom still yet-to-come in its fullness. Release for the captives has been secured, but many of the captives continue to live in a far off land. Evil has been dealt a death blow, but its dying breath is vile as ever. Jesus has been raised up as the true king, but we live in the time of mercy when subjects of other kingdoms can still renounce their tyrants and declare their allegiance to him before the final judgment comes.

So when we pray, “Your kingdom come,” we ask the Father that his in-breaking kingdom would in fact break in through Jesus, here and now.

That the extravagant welcome of the heavens for the exiles would be felt by those of us who have been in a far off land, by our families, by our neighborhoods, by our workplaces, by every human being on the face of the earth through the compassion of Jesus.

That the evil in our own lives and family and neighborhood and workplaces and world would be borne on the shoulders of the suffering servant, taken to the grave, and destroyed in the pure light of the resurrection.

That every place of power in our own lives and family and neighborhood and workplace and world would receive the humble king who rides on a donkey, the weeping king who grieves for those who reject his peaceful rule and continue to live and die in strife. 1: Start with your body. That's the bit of earth that we have the most direct responsibility for, our bodies. That’s where Jesus started. His body was received with welcome by the Father at his baptism. His body warred with evil in the wilderness, the truth of God’s word winning out over the lies of the enemy. His body was ravaged by evil on the cross, but restored and glorified by the Father in the resurrection. He entered the kingly city bodily on Palm Sunday, he maintains a presence in the newly won territory of this earth through his body, the church, and will take up the throne in the new city in his resurrection body.

Father, release the parts of my body that are captive, enslaved to desires that are not your desires. May the will of my earthly body become your will for it; may it be surrendered to your saving purposes as Jesus’ body is. Help my body to experience the welcome of your embrace, in all its brokenness and shame, that you would give it dignity and purpose, that it would be an agent of your authority, that it would be nourished by the best from your table.

Father, defeat evil in my body. Show your power to be stronger than that which has afflicted me. Heal my sickness and hurt and anxiety and weakness and bad habits. Be the prince of my body’s peace.

Father, establish a throne in my body. Exercise your kingship over every part of it, so that it bears witness to your presence in its every action. Quicken my senses to your presence, that I would recognize you and praise you with it whenever you come near. Make it responsive to your voice, to your touch, to your leading. Strengthen it by your presence and authority. Your kingdom come, your will be done, in my body as it is in heaven.

2. Pray for your emergency contacts. Pray for God's kingdom to come in your most important relationships. The people who once were on your list, or whose list you might be on. Pray for release for the parts of the relationship that are captives. That God would defeat evil in them. That he would establish a throne in them.

3. Pick 6. As the Holy Spirit leads us, we can pray in the same manner for our for our neighbors, our classmates, our co-workers, etc. Pick 6, and pray for them, mostly every day. Your kingdom come, your will be done, on earth as it is in heaven.