In the past God spoke to our ancestors through the prophets at many times and in various ways, 2but in these last days he has spoken to us by his Son, whom he appointed heir of all things, and through whom also he made the universe. 3The Son is the radiance of God’s glory and the exact representation of his being, sustaining all things by his powerful word. After he had provided purification for sins, he sat down at the right hand of the Majesty in heaven. 4So he became as much superior to the angels as the name he has inherited is superior to theirs.

5For to which of the angels did God ever say,

today I have become your Father”?

“I will be his Father,

6And again, when God brings his firstborn into the world, he says,

“Let all God’s angels worship him.”

7In speaking of the angels he says,

“He makes his angels spirits,

and his servants flames of fire.”

8But about the Son he says,

“Your throne, O God, will last for ever and ever;

9You have loved righteousness and hated wickedness;

therefore God, your God, has set you above your companions

by anointing you with the oil of joy.”

“In the beginning, Lord, you laid the foundations of the earth,

and the heavens are the work of your hands.

11They will perish, but you remain;

But you remain the same,

and your years will never end.”

13To which of the angels did God ever say,

“Sit at my right hand

until I make your enemies

a footstool for your feet”?

14Are not all angels ministering spirits sent to serve those who will inherit salvation? 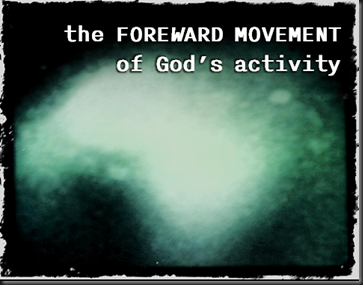 Some background on the book of Hebrews will help give us some context to begin our exploration of this theme.

Unknown author (Maybe Apollos? Maybe Priscilla?) to an unknown audience. Clues that it is written shortly before Rome destroyed the Temple in Jerusalem, during a time the early church would have been facing some serious difficulties. Clearly written to Jewish followers of the way of Jesus, who were under severe pressure to give up their Christian distinctives and return to Judaism. Some of that pressure came because Christianity was an outlawed sect in the Roman empire, and subject to persecution (Hebrews 10 describes them being put in prison and having property confiscated). Some of that pressure came from their fellow Jews who saw faith in Jesus as a threat to their historically Jewish faith, especially with the influx of non-Jewish people into the family of God through the influential ministry of Paul.

The people to whom this letter was written were having to decide whether it was worth it to continue following Jesus, wherever he might take them, or return to the more comfortable life they had known prior to hearing the good news. That’s why there is all this talk about the angels – in traditional Jewish thought at the time, the angels (messengers) were the ones who had given the law to Israel. So it was a choice between embracing the implications of the good news of the Kingdom of God given by Jesus on the one hand, and more traditional faithfulness to God’s old covenant with the Hebrew people established on Mount Sinai with the ten commandments and all the rest.

The particulars of this challenge are foreign to most of us today, what with the religious freedoms we enjoy in the West. But the message of Hebrews lands at home with us nonetheless. Every one of us faces the question of whether or not to find a more comfortable and safe way to live our lives in this world, or whether to press on in following Jesus into the dangerous waters of his Kingdom of God mission.

Maybe for you there are pretty direct parallels with the Hebrews to whom this letter is addressed. Perhaps you grew up in a home and a family that perceives the way you are following Jesus as a threat to their way of life, and so you experience social pressure from them to “come back” to the kind of life they have. Maybe that’s a religious expression that’s more cultural than heart driven, like a civic faith, or some forms of traditional Catholicism, for example… Maybe your family background is Jewish, or Jehovah Witness, or Mormon, or Islam, or Hindu, or Buddhist… Maybe your family was irreligious or agnostic or atheist…

Maybe for you, right now, the parallels are less direct but just as strong. Does being involved with God in this world mean for you living the best, most comfortable life you can without hurting yourself or others? Or does it mean moving forward into whatever terrifying adventures God might be calling you into with his Son Jesus, in the anticipation that he might use you to change the world, whatever the cost? Are you going to stay where you are and be safe, trusting that the chaos won’t intrude? Or are you going to plunge into the chaos with Jesus, trusting that he has the power and authority to bring joyful order to it all with your cooperation?

So the author of Hebrews is painting this picture of a God who is moving forward, and making the argument that all the life God has for us comes from pressing forward with him. The argument that moving backwards is a lesser life, with less power, and in fact is more dangerous than moving forward, because if we stay still, we’re left to engage the enemy alone, but if we join with God, we’ll be right in the thick of his victory march. 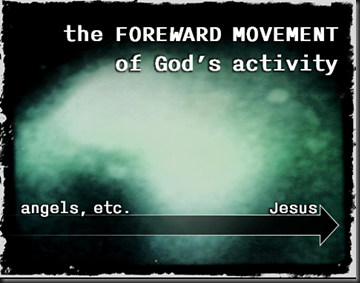 What is the forward movement of God? We get a sense from the main thrust of Hebrews 1. The angels to Jesus. The messengers of God’s word to the word of God himself. Flames of fire (nice.) to the radiance of God’s glory (c’mon!). 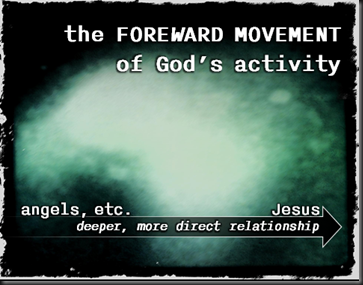 This is a movement towards deeper, more direct relationship. God speaks out of the heavens, sends signs and burning bushes, sends angels and prophets, puts his law on tablets, and then he comes in person. We aren’t receiving just his communication anymore, we are receiving (or rejecting) him. We aren’t trusting just his commands anymore, we are trusting him. Not just, “obey my commands” but “follow me.” We aren’t loving just his law anymore, we are loving him. He is not just dwelling in a tabernacle or a temple or an ark in our city anymore, he is making his dwelling place in us through the spirit of his son Jesus. It doesn’t get much deeper or more direct than that, does it? 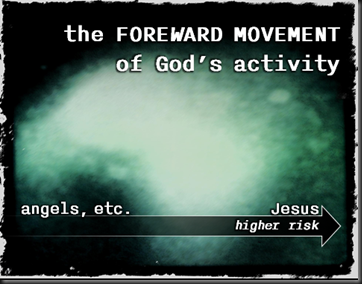 With this movement towards deeper, more direct relationship comes a movement towards higher risk. The first risks were at the level of risking being frustrated at being ignored, misunderstood, or disobeyed. (Dr. Phil level risks: “And how’s that working out for you?”) And then, when he attached his name and reputation to a tribe of people through making a covenant with them, the risks ratcheted up. They might abuse his name and reputation, making it harder for the world to know who he was. Now he was on the hook for defending them and correcting them and cleaning up their messes. (This is why parents get so upset when their kids disregard them…) But in coming among us personally in his son Jesus, the risks skyrocketed. It’s not just a prophet that might be rejected now, it’s God’s own son. It’s not just a prophet that might be sent out of the city, it’s God himself. It’s not just a prophet that might be killed, it’s the beloved only begotten son. The potential for pain and hurt and suffering on God’s part has just gone up exponentially, hasn’t it? And if this attempt to set things right goes wrong, there’s no plan b. Everything is riding on Jesus. And Jesus himself takes it one step further, letting everything he’s done now ride on his church. [John 20: If you forgive the sins of anyone, their sins are forgiven; if you do not forgive them, they are not forgiven."] That’s true risk. Some might even say reckless. As a mentor of mine said in a blog post recently, Risk is not a game by Hasbro. All true risk starts with the risks God takes. He is, after all, the God who built free will into the universe. 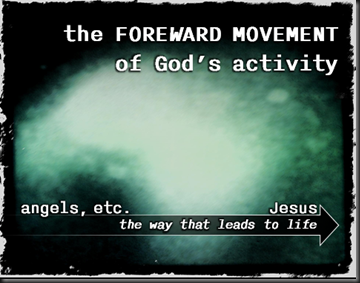 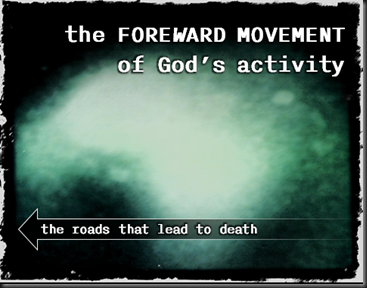 There are two sure roads to death. 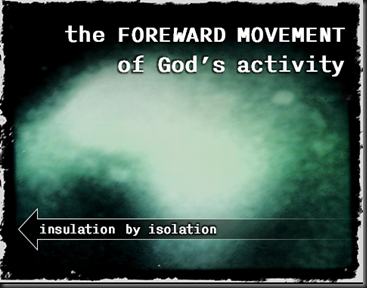 One is the road to insulation by isolation. Insulate yourself from others and the life will drain out of you like heat from your fingertips on a cold winter’s day. Your fingers were made for mittens, not gloves. You were made for the kind of insulation that love provides, and you can only know that kind of warmth through vulnerability. 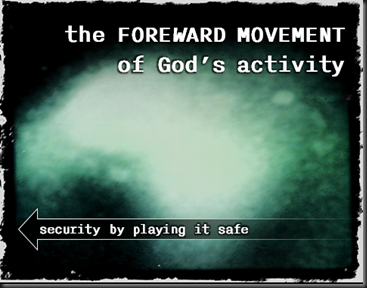 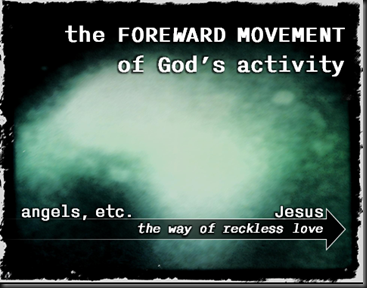 This is the invitation of Hebrews 1 – and indeed the whole letter to the Hebrews: Move forward with God. Risk everything on relationship with Jesus. God risked everything – his only son Jesus included - on relationship with you. Even if what you’re risking is the comfortable life of faith you’ve had so far, there is more in Jesus. There is deeper, more direct, more personal relationship with God available. He has more of himself to show you, to share with you. There is more adventure to be had with him than you’ve had so far. He has more for you to do. And more of his power available for you to do it. It may be scary. You may get hurt along the way. But life lies this way, and this way alone. Power for transformation of yourself and this world lies this way, and this way alone.

God is moving forward in reckless love for the sake of saving his creation. May we say no to the insulation of our comfortable life and the false security of riskless living and join him in that reckless love. 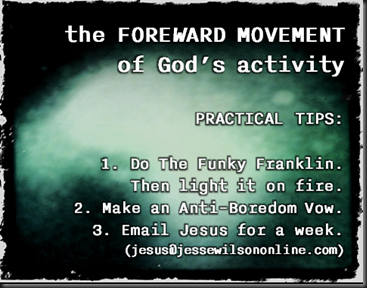 (Note on picture: I reversed the pros and cons on my example on the “Not Boredom” side.) 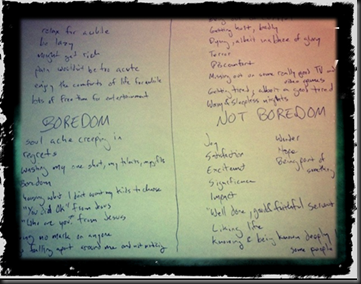 2. Make an Anti-Boredom Vow. Make a settled decision to never leave a church because you’re bored. [We have only ourselves to blame for boredom…] Sometimes we complain that we “aren’t being fed.” Jesus said he had food his disciples knew nothing about. His food was to do his Father’s will. It’s not insignificant that Jesus said this after taking a major risk in relationship with a Samaritan woman. Our nourishment comes from taking risks in love. You’ll never be bored doing that. (by the way, I’m sure there are good reasons to leave a church, but I know being bored isn’t one of them. You’ll just go be bored somewhere else if you’re looking for food that’s different than Jesus’ food.)

3. Email Jesus for a week. Start a two-way conversation with Jesus at the start of every day for a week. Jesus, get my attention if there is anything you want me to do for or with you today or anytime down the road. See what happens. See how he moves you forward. See how it feels. Expand it to asking him for his opinion on challenges you’re facing, or decisions you have to make. Jesus, get my attention if there is anything you’d suggest, or a decision you’d recommend for me. Jesus is someone you can have a real relationship with, unlike the angels. (email jesus (at) jessewilsononline (dot) com).