[new things that change what comes after, vs. a new kind of new thing…]

Paul’s letter to the Colossians describes Jesus this way: “He is the beginning, the firstborn from among the dead.” 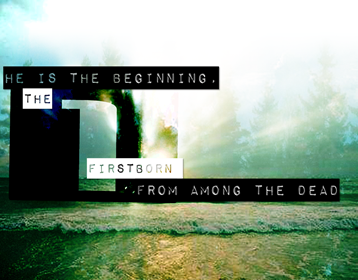 This morning, I believe Jesus wants his resurrection to shape our imaginations beyond the popular imagination.

The popular imagination says one of two things.

One version of the popular imagination says there is no more to life than this life. 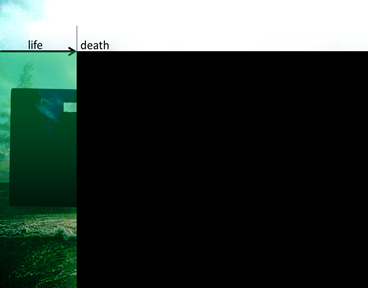 This perspective says that the joys and goodness you experience are joys and goodness that only go as far as they go. Which for some of us is pretty far, and for others not so far at all. And that the struggle and pain you experience, in the end, one way or the other have their final say, and then there is nothing to be said after that. Except, of course, for what those who go on after you say about you.

If this version of the popular imagination is what shapes your life, then the best you can hope for beyond death is that those who go on after you discover that the way you lived adds more to the joys and goodness they experience than it does to the struggle and pain. Which is certainly not the worst thing to hope for. But is it really the best? 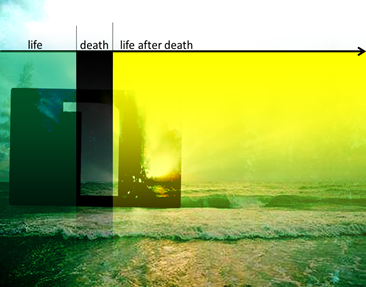 The other version of the popular imagination says that there is life after death. Life that may take all sorts of forms: perhaps reincarnation, paradise in the company of virgins, some kind of disembodied ethereal existence of the kind enjoyed by Obi-Wan Kenobi and Anakin Skywalker and Yoda at the end of Return of the Jedi, or in the case of the most popular Christian imagination, blissful existence with God and angels and redeemed loved ones in some kind of heavenly other dimension. Sometimes this is a deeply comforting hope; other times it is a bit, well, less than exciting:

Resurrection wants to shake our imaginations out of both of these daydreams, and inhabit our vision of the future with a concrete reality upon which whole new kinds of lives can be built.

Because Life after death isn’t enough for God’s good creation.

Says death still has all kinds of power

Says death has power to end life as we know it.

Us from one another.

Us from our God-given bodies.

Us from our God-given purpose.

Us from our God-given dreams.

Says death has power to keep the future at a distance.

Says death has power to turn our labors of love into labors in vain.

Resurrection speaks the words all of creation has been dying to hear.

Resurrection says No! to the terror of death.

Resurrection says Yes! to the laughter of Love.

Resurrection says there is Life-After-Life-After-Death. 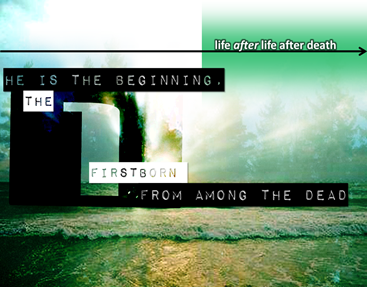 And that that life – Life-After-Life-After-Death - is the life of the ages, life incorruptible, imperishable, glorious, powerful, undying. 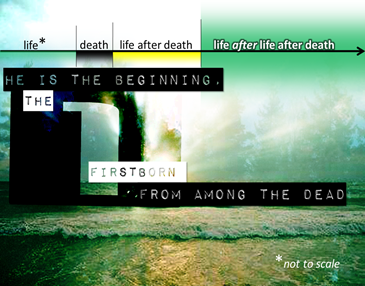 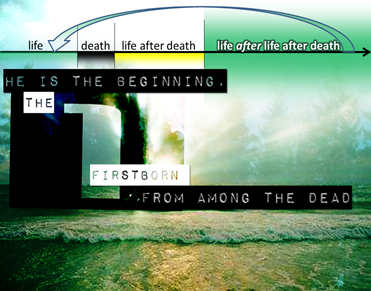 The gospels are very clear that the resurrected Jesus wasn’t a ghost, an apparition. He had a real deal physical body, one that could eat and be touched and seen and heard. And it was still recognizably his body – it had the marks of the crucifixion on it still, for example, and when people did recognize it, they recognized it as Jesus. But it was also more, different, transformed, new. Transformed enough that some didn’t recognize him at first, perhaps in the way a bride will have such a radiance that even those who know her well may take another glance to be sure it’s actually her. It was a body that death, illness, pain, suffering could no longer touch. A body that was equally at home on earth and in the heavens, and mysteriously capable of slipping back and forth at will, until doing so one final time at the ascension, to remain in God’s dimension until the final joining of the heavens and the earth, God’s dimension fused with our earthly dimension, at his second coming. Jesus’ resurrection body, in other words, is a body that belongs to the life after life after death part of the time line.

Life-after-life-after-death is life that takes all that is holy and good and God-breathed about our present mixed up lives, and present mixed up world, and remakes us, and this world, as fully holy and fully good and fully God-breathed, fully reflecting the glorious image of our creator. The resurrected Jesus is our first glimpse of this kind of life, the source of our hope for something more than life after death.

Don’t get me wrong, life after death is part of the picture for those of us who die before Jesus returns to set everything right, to complete God’s new creation that began with his resurrection (like the rebel crucified next to Jesus, to whom Jesus said, “surely today you’ll be with me in paradise”). Jesus himself must have experienced some kind of life after death during the time his body rested in the tomb. It’s just that the Bible doesn’t say a whole lot to us about life after death; probably because life after death doesn’t say much to us either.

But life-after-life-after death? Well, you might say you just can’t shut it up.

Says that death isn’t the end of life as we know it. 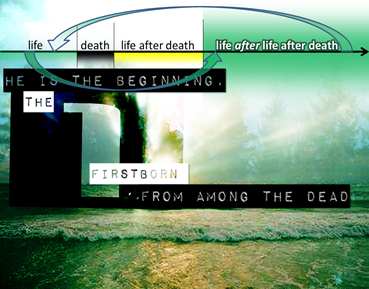 Says that there is so much to know of life as we know it that the knowing has only just begun.

Every good thing I’ve ever experienced, I’ve experienced with my body: through my senses, interpreted by my brain. [examples…]

Sure, it’d be nice to free from pain, to have some rest. But I can only get excited about that as much as I can get excited about sleeping. Which is exactly how the Bible describes life after death – “those who have fallen asleep in Christ.”

No, what gets me excited, what gives me hope, is the idea that the good parts of my life today, the waking, wakeful parts – the elements of who I am, the things I do, that are lined up with the love and goodness of God – might actually still matter tomorrow, that they might actually be around tomorrow, they might turn into what they’re really meant to be tomorrow. [training for sports, music, reading…]

Says Love has robbed death of all its power.

Says Love now has power to undo every barrier death can throw at life.

Death, in other words, isn’t shaping anything anymore. Not anything that will last, anyway.

Says that hope beyond hope has surprised us, and keeps on surprising us.

Says that since it’s already happened once with Jesus, now every mundane moment is pregnant with the possibility of encountering something new, something that comes forward from God’s good future and changes everything about the present.

We can be out one morning, going through the motions, doing our loving duty (like Mary going to finish the burial process) and the Gardener of a New Creation can show up and send us on a new mission. We can be in a locked room without hope (like the gathered disciples), and Peace that passes understanding (and apparently, passes through walls, too) can show up and breathe new life into us. We can be filled with doubts (like Thomas), hanging onto our own low expectations, and our hidden Hope can materialize and present Himself for inspection.

Just as soon as we die to this life.

Just as soon as we die to lives that have been shaped by a deference to death’s power.

Just as soon as we defer to Love’s invitation.

Because resurrection life is only found on the other side of death. 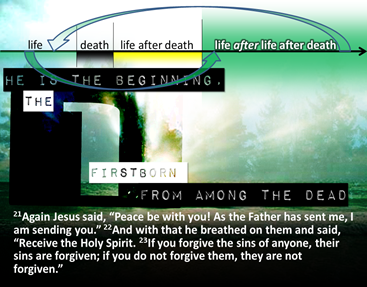 21Again Jesus said, “Peace be with you! As the Father has sent me, I am sending you.” 22And with that he breathed on them and said, “Receive the Holy Spirit. 23If you forgive the sins of anyone, their sins are forgiven; if you do not forgive them, they are not forgiven.”

Says our labors of love are not in vain.

Says that everything surrendered to Love’s purposes and animated by God’s Spirit finds incorruptible completion in God’s new creation.

As the Father has sent me, I am sending you, Jesus says as he breathes new creation life onto us, into us – Receive my Holy Spirit!

Every single thing we do in response to that sending, everything we do empowered by that breath – everything we do in Christ, by his Spirit, in other words – every single thing will find its completion in the life-after-life-after-death new creation. Just as everything Jesus did found its completion in his resurrection. Every act of love, every act of justice, every effort towards peace, towards forgiveness, towards reconciliation, towards healing, towards freedom, towards holiness. All of it part of the new reality that will come in fullness when Jesus appears again, when God’s perfect future fully encompasses the present, when the Father’s will is done on earth just as it is in heaven. Not a single thing done will be a waste. It will all have full and vibrant expression in the fullness of the kingdom of God.

God’s new world has arrived in Jesus, and now his students are laying the groundwork –with him, by the Spirit – for it to arrive fully everywhere else. 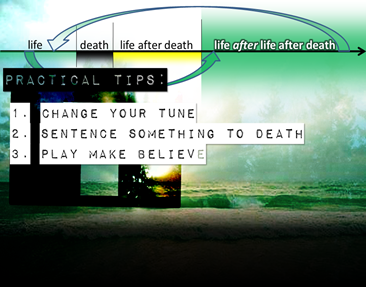 2. Sentence something to death. Identify one thing about your current life-before-life-after-life-after death that you need to die to in order to make way for resurrection life in your life.

“Death has been swallowed up in victory. Where O death is your victory? Where O death, is your sting?” The sting of death is sin, and the power of sin is the law. But thanks be to God! He gives us the victory through our Lord Jesus Christ. Therefore, my dear brothers and sisters, stand firm. Let nothing move you. Always give yourselves fully to the work of the Lord, because you know that your labor in the Lord is not in vain.